Fuck the Tigers, Fuck the Draft and Fuck Andrew Brackman

Detroit just dashed many Yankees' fans dreams by selecting Boras boy Rick Porcello just a few picks before the Yanks could get their claws on him with the 30th pick of the first round of today's amateur draft. Porcello's contract demands scared off a lot of teams, but in a replay of the Andrew Miller pick, the Tigers stepped up and swooped in opportunistically.

And how did the Yankees respond? By choking and taking the biggest-money kid around, 6'10" N.C. St. hurler Andrew Brackman. This pick screams high-cost bust. He throws 99 mph, but has had arm injuries and poor results.

Kevin Goldstein at BP doesn't like the pick, and his colleague Bryan Smith chimes in:

He's fun to watch pitch, I know, but at some point, the results have to matter. The consistency isn't there, the dominance has never been there, and earlier in the year, I wrote about his struggles against 1-5 hitters in the ACC. He is probably going to do well in the low minors, if he's healthy, but I don't see him having much more success than Jon Rauch.

Now it's time to sit back and watch as stat-centric Yankees bloggers revolt. Mock drafts had the Yankees taking Matt LaPorta, and praying for Porcello, but haven't we had enough of tall pitchers recently? 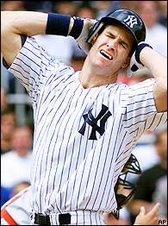 Calming the Rage Within